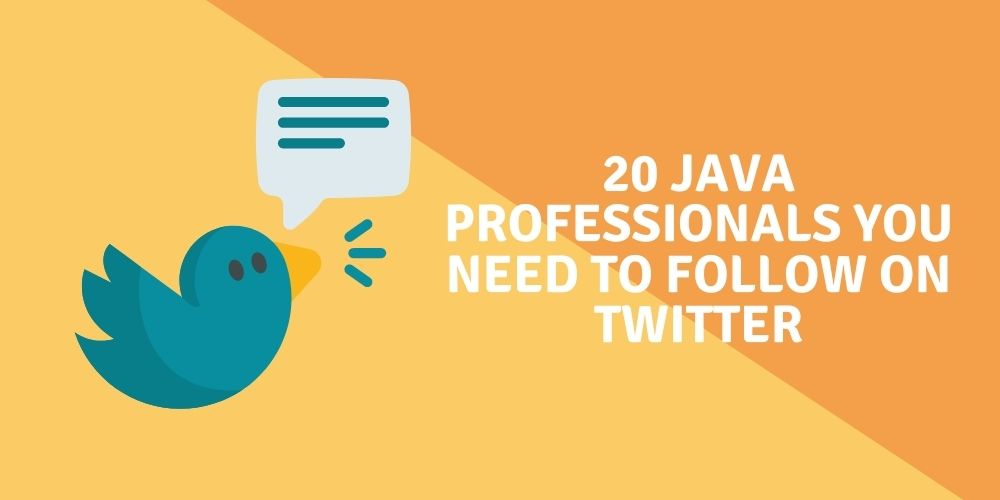 Through social media, blogging and speaking at international Java events, members of the Java community have helped to make what Java is today.

We’ve searched the Twittersphere for some of the leading Java professionals. These people were identified based on a couple of factors, including tweeted topics, followers, and their contribution to the Java community based on their past and current projects.

Make sure you check out their blogs, follow them on Twitter and spread the word about each of these fantastic experts.

Joshua is known to have written one of the most influential books in the Java industry—‘Effective Java’— with the second edition launched at the JavaOne conference in 2008.

‘Effective Java’ is considered recommended reading for all developers as Joshua explains the simplicity of the message he tries to convey through the book.

In an interview with DZone, Joshua summarises one message on the value of his book: “Always strive to write simple, clear, and correct programs. It is penny wise and pound foolish to do otherwise. Style does matter. It pays real dividends in terms of correctness, usability, robustness, and maintainability. Also, it’s way more fun to write good programs than bad ones.”

With over 212k followers, Martin is a renowned author and speaker on the design of enterprise software. Martin started working with software back in the 80s and specialised in bringing objects to business information systems using Smalltalk and C++. Now he specialises in Java, C#, and Ruby.

Martin has authored seven books to date including ‘Patterns of Enterprise Application Architecture’, which describes some of the common patterns he has experienced when developing enterprise applications. The book won a Software Development Productivity award and a ‘best Java book’ award from javaworld.com.

Arun is a well-known developer and evangelist working at Red Hat. His experience also consists of working with developer communities at Oracle and Sun.

As a JavaOne rockstar, Arun is one of the founding members of the Java EE team and a Java User Group (JUG) leader in San Francisco’s Bay Area. His experience has influenced the younger generation, notably at the Devoxx conference, where he founded the Devoxx4Kids.

You will often see or read about Josh speaking or demonstrating at conferences including Java Symposium, SpringONE, JavaZone, and Devoxx. This is because he has been leading the front for Spring Boot and cloud-native Java.

Josh is the lead author of several books, including Spring Recipes: 2nd Edition, and is an editor on the Java queue for InfoQ.com.

Antonio is a senior software architect living in Paris. His career in IT started in 1992, initially focusing on C and C++ development, but then switched to Java in the late ’90s. From working in several countries and companies, he now works independently as a Java EE consultant.

As a Java Champion, Antonio speaks at popular international conferences about Java EE. He blogs regularly about these conference trips as well as sharing thoughts about Java in general.

James is a well-known Pivotal Java/Spring developer in the community. He is a speaker with a great passion for helping Java to be increasingly leveraged in cloud-native and machine learning applications.

His contribution to the Java community includes authored books and speaking at international software technology conferences, specifically on Java and Cloud Native development.

Through his experience and blogging, Markus has been educating the community more about how microservices architectures are able to integrate and complement existing platforms, as well as advising on how to successfully build resilient applications with Java.

In the last decade, Javin has been working in Java, FIX tutorial and Tibco RV messaging technology. He spends most of his time blogging about these. Additionally, he shares his insight on explaining Java programming tutorials and interview questions and providing advice on NRI banking and saving tips.

Through blogging across three websites, Javin shares his expertise and knowledge to the community, covering all core Java.

Similar to a select few on this list, Trisha is a Java Champion and a leader of the Sevilla MongoDB and Java User Groups.

As a regular blogger at GitHub and working remotely for JetBrains, Trisha enjoys the challenge of solving technical problems and using her experience to teach developers techniques that will make their lives easier.

Yolande is a Java evangelist who empowers developers from all over the world to successfully grow their personal projects, businesses, and their careers. She manages the interest of over 350,000 developer enthusiasts on the official Java Twitter page and is a longtime member of @jduchess, a fantastic networking community of women in Java.

As a JavaOne Rockstar, she regularly outputs technical content on one of the world’s biggest IT communities, interviews IT professionals globally, and writes blogs about current Java technologies and projects.

Simon has his name plastered with Java Champion as well as JavaOne Rockstar and is the founder of Virtual Jug—the world’s first and only online Java User Group.

Through Virtual Jug, Simon helps produce insightful podcasts about Java with guest spots from those in the community.

Paris is a software engineer working and living in London and is the JUG leader of the Hellenic User Group.

As well as being passionate about the internet and all things IT, Paris is an occasional blogger sharing insight on Java technology, and his experiences on attending conferences including Devoxx.

In the last decade, his career has involved the implementing and defining of Java EE and its specifications to ensure that it was as simple, testable, and as light as Java SE.

For more than a decade, Agnès has spent her time building and implementing Java architectures.

As the only French female Java champion, Agnès was the leader of the Lyon Java User Group for five years, and now leads Duchess France – the networking community that brings women in IT together, which aims to provide more visibility to female developers.

In the early days, Jessica spent a lot of years developing C and Java at big companies, and now she is a talented software developer, automating everyone’s software development at Atomist.

When she is not attending international conferences, Jessica blogs about various programming languages including Java, JavaScript, Scala, Ruby as well as general architecture and development.

Richard has contributed his expertise and knowledge on Java through his blogging by sharing insight from debuggers to CPU caching.

He is the author of ‘Java 8 Lambdas’, which takes you through an in-depth language development of Java 8 with the addition of lambda expressions.

Nicolas has dedicated more than 15 years to software architecture, with a primary focus on Java, Java EE, and Spring.

He uses his experience to teach at higher education institutes, acts as a trainer to share his profound knowledge and experience, as well as authoring books on integration testing.

An honourable mention for Mark, who, as the Chief Architect of the Java Platform Group at Oracle, certainly deserves a spot on this list of people to follow.

With the development of many important projects including JDK 8 and Java 9, Mark shares all the progress updates and announcements directly to the Java community.

Another honourable mention. Not only is Linda a Java Champion, she is also the founder of Duchess – the global networking community that connects women in Java technology.

Additionally, she is the co-organiser of the Dutch Devoxx4Kids event, an organisation that encourages children to learn how to program.

Last but not least, Heather is the leader of the Java Community Process (JCP) Program at Oracle. Her work and experience have led to getting involved with getting more girls involved with technology with events such as Devoxx4Kids, Day of the Girl Events, and working with TechBridge Girls.

On top of this, Heather also works with female technology groups in the community including JDuchess, Women Who Code, and the Grace Hopper Conference/Anita Borg Foundation.

We hope you take the time to check out some of the recommended Java bloggers on our list and help support their journey in bettering the Java community.

Who else do you think should be included in this list? Leave us a comment below and let us know.