Why is Java so popular for developers and programmers? 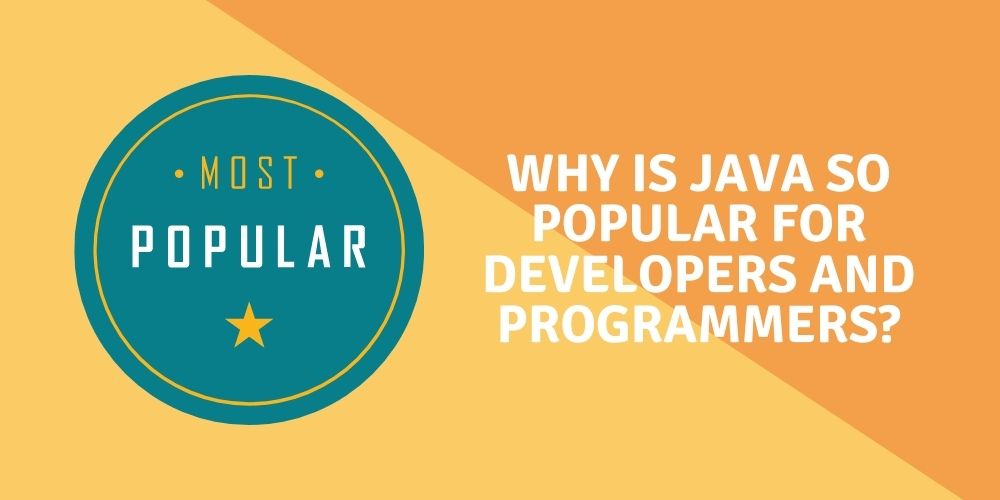 Even as more programming languages develop, Java seems to be getting a lot more widespread year on year. So, why is it still popular after 22 years?

Having celebrated its 22nd anniversary in 2017, Java has experienced consistent development in its programming efficiency for decades. It is one of the most popular programming languages around the world and is designed to keep running on any stage consistently.

Why is Java so popular?

One of the biggest reasons why Java is so popular is the platform independence. Programs can run on several different types of computer; as long as the computer has a Java Runtime Environment (JRE) installed, a Java program can run on it.

Most types of computers will be compatible with a JRE including PCs running on Windows, Macintosh computers, Unix or Linux computers, and large mainframe computers, as well as mobile phones.

Since it has been around for so long, some of the biggest organisations in the world are built using the language. Many banks, retailers, insurance companies, utilities, and manufacturers all use Java.

Steve Zara, a programmer for more than 40 years, describes how there is no sign of Java declining in use. Instead, it is an evolving language which almost uniquely combines stability with innovation.

Highlighting the longevity of the language, Zara states that the code you may have written 15 years ago will run on the most up-to-date JVMs and gain the speed advantage of the latest profiling, native code translating, and memory management.

Java is fundamentally object-oriented. The code is so robust because Java objects contain no references to data external to themselves.

The language is considered to be very simple; however, it comes with a library of classes that offer commonly used utility functions that most Java programs can’t work without.

The language consists of 50 keywords, but the Java API has thousands of classes with tens of thousands of methods you can use in your programs.

Despite this, developers aren’t expected to learn all of the Java API, and the majority of them are only experienced and fluent with a small portion of it.

Is Java worth learning?

Since the language has an English-like syntax with minimum special characters, Java could be learned in a short time span and used to build suitable applications.

Java is part of a family of languages that are heavily influenced by C++ (as well as C#), therefore learning Java offers vast benefits when learning these other two languages.

Swarnim Srivastava, a Java Enthusiast, agrees that the language is worth learning. He explains the critical areas in which it is used:

Although there are other ways to make Android apps, most of the applications are written in Java using Google’s Android API. Although Android uses difference JVM and packaging methods, the code is still predominantly Java.

Many government, healthcare, insurance, education, and defence departments have their web applications built in Java. A significant example of this is Google’s Gmail.

Many useful software and development tools are written and developed in Java, e.g. Eclipse, IntelliJ IDEA and NetBeans IDE.

Nowadays, Java is often the default choice for scientific applications, including natural language processing. The main reason for this is because it is safe, portable, maintainable and comes with better high-level concurrency tools than C++ or any other language.

Depending on your career prospects, Java can take you on different career paths. Whether you’re interested in building games, mobile applications, desktop applications, or web applications, Java is capable of working in these environments.

Regardless of whether or not you use Java in your career or job role, you’ll learn syntax, ideas, patterns, tools, styles, and idiosyncrasies that are readily transferable to other programming languages as well.

Learning Java will give you the opportunity to see how one language does something in comparison to another. Additionally, knowing what works for Java and other languages will make you an even better well-rounded developer.

Struggling to pin down the right Java developer for your business? FRG Technology Consulting has developers ready and waiting to be your next Java hire, take a look at our candidate search to find your perfect programmer.

Why program in Java?

Java is easy to write and easy to run—this is the foundational strength of Java and why many developers program in it. When you write Java once, you can run it almost anywhere at any time.

Java can be used to create complete applications that can run on a single computer or be distributed across servers and clients in a network.

As a result, you can use it to easily build mobile applications or run on desktop applications that use different operating systems and servers, such as Linux or Windows.

Once a developer is familiar with installing JDK, setting up PATH and understanding how CLASSPATH works they will be able to build code easily.

There’s a lot that you can do in Java, and you can find libraries that do almost anything. With Java, there are better GUI (Graphical User Interface) systems than the default AWT (Abstract Window Toolkit) and Swing libraries.

For these reasons, the developer community is proving to be the strength of the language and its platform. A programming language wouldn’t survive if there is no community to support, help and share their knowledge.

With tens of millions of developers using and working on the Java programming language, the community continues to grow and inspire.

The importance of Java

With the language being as popular as it is, there are tons of resources to learn from. Fortunately, a lot of these resources are available online, and these can act as your companion in the learning process. There are free and paid learning resources available, depending on your level of skill.

Technology is advancing at an incredible rate, meaning there are lots of upcoming job opportunities and developers who have a solid knowledge of Java are in great demand.

With an existing base already, the Java programming language continues to create many jobs in the tech industry.

Java is an all-around universal programming language. Due to its solidity and scalability, Java is found on mobiles, desktops and large-scale industry servers and applications.

Recently, Java has been gaining credibility in the area of Internet of Things (IoT) and cloud development.

Globally, there are around 10 million Java developers, and this community continues to grow on a daily basis. Similar to other open source technologies, Java encourages the values of giving back to the public.

Online forums, such as StackOverflow, consists of Java developer experts who are ready to help beginners.

Java is more commonly used in your daily life than you might think. It is used on popular websites you might often use such as Google, YouTube, LinkedIn, Amazon and eBay. Additionally, Java has a strong development roadmap with continuous progress in security and performance.

While Java does not suit all needs, it’s still a popular programming language which is widely used and benefits a lot of people and businesses.

Even after 22 years of existence, Java continues to evolve.

Looking for a new Java career? Browse our available jobs and see if we can find you your dream role.